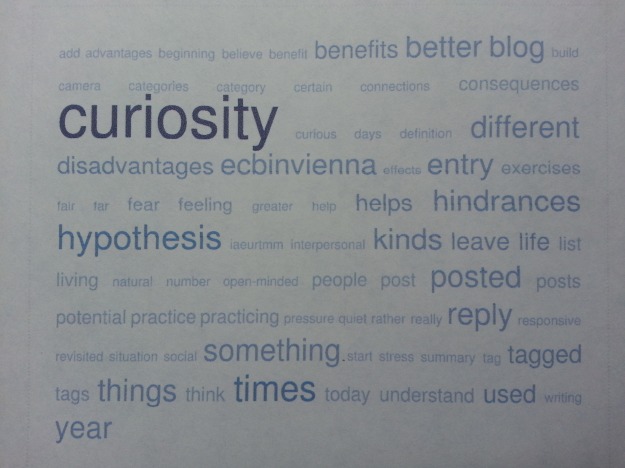 I have only one more thing to say at the end of this Year of Living Curiously, and that is: THANK YOU!

Thank you to those faithful readers, friends and strangers alike, who have been following this blog. It was wonderful and motivating for me to feel your presence and support. There are a few people who read it every day. To these people I want to offer special thanks. I feel you should get a medal for tenacity and true friendship!

Among those readers there are people who:

I have already thanked most of you at least once, but THANK YOU AGAIN!!!

All along the way, people have asked me if writing this blog is worth it and want to know what I’ve learned or what I’m getting out of it. Here are some answers:

Today I just want to take a quick look at some statistics as provided by WordPress.

Again, I have to mention that I have not finished updating categories and tags (have checked through Day 242), so the numbers are not entirely accurate—but then you already know that I wasn’t spectacularly consistent in using the categories and tags so such an analysis only gives a basic idea of trends anyway.

Most viewed post overall: 1 September 2016 with 20 views (This is not surprising as it was the first day and I had sent out an e-mail announcing the start of my blog.)

So far, the category I have used the most is: Things to be curious about (132 times)

The category I have used the least is (sadly for me): Going deeper (7 times)

The tag I used the most is: Interpersonal curiosity (a stunning, for me, 55 times)

The tag I used the least is: Actually there are a number of tags that were only used once, so I couldn’t really say.

For myself, I did also want to record the days when I just checked in but didn’t post anything about curiosity. I kept track of this with the tag “Taking a break,” which has come up five times so far. I think there will be at least twice that number by the time I’m done checking tags. From May on I was pretty overwhelmed by work, which was the main cause of my just checking in.

And that’s it for the “statistics”.

I started this blog almost a year ago with the statement below.

Yesterday I analyzed the advantages and disadvantages of living with greater curiosity, calling up how often certain points were tagged. Below is how I did on each point. A quick explanation and a caveat: For the most part I tagged posts when I experienced the benefit so a tag is like a mini piece of evidence that living with greater curiosity did bring that benefit, at least in that one situation. The caveat is that I have so far only finished reviewing the categories and tags for the first seven months so the numbers may be a bit low. I should also mention that, as you can imagine, I was not brutally consistent in using tags so there is a certain level of imprecision in my calculations.

The runaway benefit, tagged 22 times, was “Know and understand more” (by which I meant “learned something and/or explored someone else’s viewpoint”).

The other points in my hypothesis were tagged as follows:

Set me up to be more responsive: 8 times

Help me build better connections to other people: 10 times

Be the path to growth and the way to enjoy the journey: 0 times(?)

Be an antidote to self-righteousness: 0 times (without the question mark—oops)

Contribute to my enjoyment of life: 8 times

“Enrich my life” is not clear, but if I add “Escape from boredom” and “Energize” together that makes 6 times.

As I mentioned yesterday, a few benefits came up over the year that weren’t a part of my hypothesis, like:

This post isn’t really about disadvantages of practicing curiosity because my hypothesis was not about the disadvantages. Nonetheless, I would like to mention that, in a desire to be balanced, I went through the year keeping an eye out for disadvantages. Perhaps I didn’t do a great job of keeping the balance, but as of this writing there were only two posts that addressed the disadvantages (finding out things one might rather not know and feeling overwhelmed by too many possibilities). That alone seems like a vote in favor of living with curiosity.

Finally: Does my year of exploring curiosity support my hypothesis? Has it really created greater quality of life for me?

I think the experiences I have gathered in the context of writing this blog do support the basic idea. I believe more strongly now than at the beginning that really mastering curiosity as a way of life has the potential to deliver the benefits in my hypothesis and more. What I can also say at the end of almost a whole year of concentrating on curiosity—after years of trying other ways to practice—is that certain kinds of curiosity (like existential and interpersonal) are a lot harder for me to practice than I expected. The phrase “I’m sure that if I had practiced curiosity in this situation, then I would have experienced less stress/built a better connection to that person/been less self-righteous/etc.” came up a number of times.

What is clear for me is that this blog has helped by focusing my efforts and creating (I don’t know why I’m surprised about this) a supportive community of readers and friends who have accompanied, reminded, and helped me in what one of them called my “curiosity quest”. The other thing I know is that, although I’ll be writing the last post on Thursday, I will keep trying to practice curiosity and to reap the benefits.

I’ll be revisiting my hypothesis tomorrow so today I’d just like to list first the potential benefits and then the potential disadvantages of curiosity that came up in the course of writing my blog.

As an aside: One of my greatest pleasures in reviewing this category is that there were some new ideas, some of which came from things other people had said and some of which simply developed over time. I can already tell that one thing I wanted to have happen this year has happened—I have a broader understanding of curiosity and its potential benefits and disadvantages. 🙂

Potential benefits (in approximate order of frequency, starting with the most frequent)

Potential disadvantages (each one listed once or less)

A Year of Living Curiously
Blog at WordPress.com.